Sleeping With the Enemy 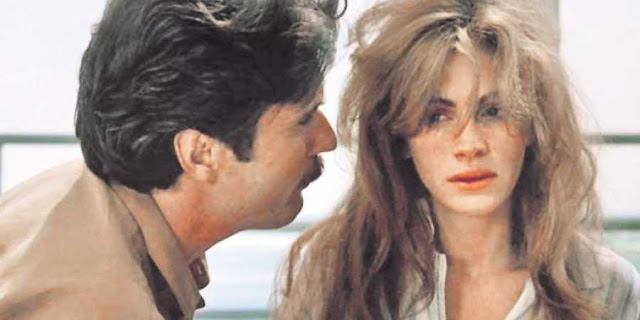 Sometime ago there was a movie with Julia Roberts called “Sleeping with the Enemy.” The title is kind of weird for the movie because it really had nothing to do with what happened in the movie. For those who never saw it, SPOILER ALERT, it’s an old movie, released in 1991. After faking her death in order to flee from her violent husband, Martin (played by Patrick Bergin), Julia Roberts character, Laura, leaves Cape Cod and moves to Iowa, where she creates a new identity and starts dating a local teacher named Ben (played by Kevin Anderson). Martin begins to discover that Laura isn't dead and tracks her down. But Martin has some real OCD issues, which is why Julia Roberts leaves in the first place. Why it’s called Sleeping with the Enemy, I don’t know. Maybe because at one point, she is forced to have to stay with someone she considers her enemy. Someone against her. Someone against everything she believes in. Hmmmm. But whatever the case, it was a very good movie and worth watching.
The Bible says “how can two walk together except they be agreed.” Which simply put means, how can you walk in peace or in unity with someone, unless you are walking in agreement, believing the same thing or being of the same mind. I found myself of late chewing on this Scripture. Coming off of the Tea Party that our Women’s group, the Favoured Women of God were able to host recently, still meditating on the Word of God shared by Evangelist Lillie Bonds, “Thorns vs. Scars” and even meditating on our theme, “These Thorns” and how the grace of God is sufficient. All of this has me in the Spirit realm.
God has been showing me so much and He has been speaking in so many directions and on so many other levels. But isn’t that so like Him? (Side note: Don’t ever put God in a box, looking for Him to speak in just one way or to answer one specific question. God will give you that answer and give you a host of other answers to questions you didn’t even ask). Anyway, the battle is real in the Spirit, even as far as what is going on with the abortion law and women’s rights and the political arena. It’s so much more than what it appears to be. This is a spiritual battle. We are in spiritual warfare and it has been that way for years. But let’s not get off topic, even though I feel as though I’m right there. Sleeping with the Enemy. How can two walk together except they be agreed? That’s the question.
Many are walking in agreement with the enemy. Yep. It’s all over the place. Right before your eyes. People are sleeping with the enemy. Agreeing to his word. He has one too. Chock full of lies. Agreeing to what he tells them to do. His silent whispers. They’re walking in bitterness. In shame. Walking in unforgiveness. Walking in darkness. Walking in untruth. Walking in guilt.
He is whispering things to them in the middle of the night. Going to bed with them. They are laying down with him. Under the covers. As they pull the sheets over their heads to go to sleep, he is right there, whispering. Kissing them. Cuddling with them. Filling their heads and their hearts with lies. I can hear him. “It’s not going to be alright. You are all alone. You are not that strong. You can’t do it on your own. They don’t care about you.”
If you are listening to all of this, you are sleeping with the enemy and it’s time to wake up. Time to stop agreeing with the lies he’s telling you. You know the Truth. It’s time to come out from underneath that blanket of darkness and open up those blinds. Let the light in. Let the Truth in. Even if it hurts you.
You know that I thought that the movie had nothing to do with it, but look at God, because it does. Throughout the movie, Julia Roberts was always afraid. Afraid of what she was feeling. Afraid that the enemy would always come back. Afraid that she would be found out. Afraid to face him. And the horror she felt when she realized that she was found... it was all over her. But she knew it was either her or him. One of them had to go. She had to come out of agreement with him. Come out of agreement with what SHE was allowing him to say to her. To do to her. Even if it meant it would hurt her.
But once she did, she came into alignment with the Truth. The light of who she was. She realized she was nothing of who that enemy said she was. She was no longer sleeping with the enemy. She was defeating him. Defeating the enemy and winning. And you can too. But you have to stop sleeping with him, first.
Because how can two walk together except they be agreed?
Walk with God. Agree with God. Because God is real and God is good.
A servant of the Lord,
Sis. E
Copyright ©2019 EvelynFannell
Posted by God's Peach at 2:15 PM